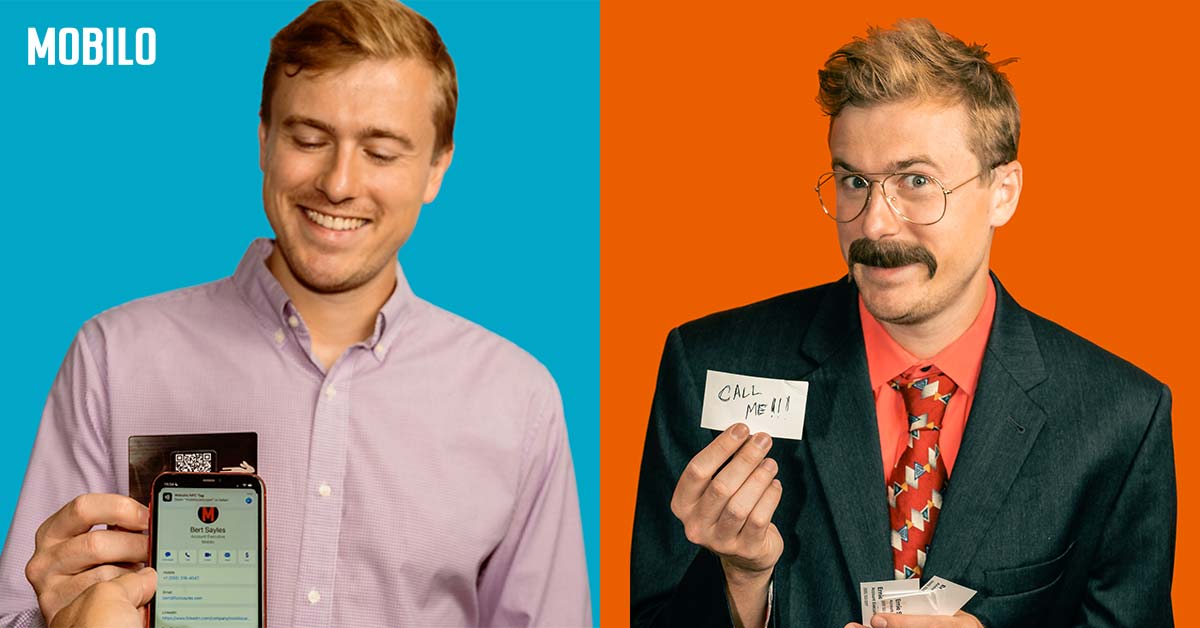 The Networking Tale of the Sayles Twins - Bert & Ernie

Although technically fictional, Bert and Ernie represent a very real theme that every business professional should honestly assess:

Will people remember you?

Memorability isn’t always a good thing. If you pull the fire alarm at the convention, then stand on a table and start shouting at the top of your lungs, people will remember you well. But you probably won’t walk away from the event with too many new meaningful business connections.

Besides your charming wit and personality, there’s one way to nearly guarantee people remember you in a positive light: with a Mobilo smart business card. It’s like upgrading from a flip phone to an iPhone — while everyone else at the convention is still using a flip phone.

And so began the tale of Bert and Ernie, two sales professionals who attended the same networking convention, but used drastically different methods of information transfer to achieve dramatically different results.

Ernie: Lots of Effort, with an Unfortunate Outcome

Ernie put on his favorite suit, walked out of his hotel room, and descended in the elevator to the first floor of the hotel where the convention was being held.

Throughout the event, he was charming and fun to be around. Whenever he hit it off with someone and they were involved in similar business pursuits, he exchanged a traditional paper business card with the other individual.

Throughout the duration of the event, he exchanged 75 paper business cards with other individuals. He was excited for all of the potential new business he could drum up from this short two-day conference.

When he arrived home, Ernie was jet lagged and exhausted. Understandably, one thing led to another, and with work and personal obligations, it ended up taking a full week for him to input his new lead info into his CRM.

Finally, he began contacting his new connections from the convention. To his surprise and dismay, he received only a few responses back. The responses he did receive were lukewarm in receptiveness, and ultimately led to nothing.

Was attending the convention even worth it?

Ernie looked to the side of his computer monitor at the big stack of paper business cards he had amassed during the event, and sighed. Truth be told, Ernie himself had forgotten many of the details about many of these people.

How could he hope to stand out from the crowd, and make meaningful new connections, when after the event, he would ultimately amount to just another card in the stack of impersonal paper business cards?

Bert put on his favorite suit, walked out of his hotel room, and descended in the elevator to the first floor of the hotel where the convention was being held.

Thanks to Mobilo’s integration with 3,000+ CRMs, Bert was able to automatically pipe his new lead info into both his smartphone contacts and his followup funnels. The result was no manual labor on his part—but 14 new meetings, and five sales as a result of those meetings.

Thanks to Bert’s new business success, the networking convention ticket paid for itself many times over.

Not only did Bert’s improved contact information acquisition and followup tactics get the perfect message to the right people at the right time, but everyone remembered him, too.

What did they remember him for? His charm and personality, of course—but also his pulse on the latest and greatest in networking technology.

A few of the people Bert met secretly went home and ordered Mobilo cards for themselves.

Smart business card technology is a major upgrade to traditional paper business cards, and Mobilo is a leader in the field, with 25,000+ teams using our infrastructure across 200+ countries.

For as little as $7, you can get access to four modes of information transfer, to ensure you spend the least time getting the best results in any networking situation you may find yourself in.

Thanks to NFC compatibility (and QR code support as a backup), Mobilo’s smart business cards work with any smart device—which means from now on, you’ll always “wow” the new prospects you come into contact with.

‍Learn more about Mobilo or order your Mobilo card today.